Located 175 km west of Tunis and 40 km east of the Algerian borders, Kef has been, since ancient times, the main city of the Haut-Tell region in the Tunisian North-West and of a good part of the Algerian East.

Built at an altitude of 735 meters, the city of Kef is known for the refinement of its culture, arts, gastronomy, and crafts, as well as for its numerous archaeological sites, witnesses of a particularly rich history.

The short film in the cinematographic landscape

Hundreds or even thousands of short films are made every year in Africa.

However, very few cinemas in Africa practice pre-screening, and film festivals dedicated to short films are very rare, which is a pity, considering the production flow.

In 2016, at the first edition of the Kef Short Film Festival. 39 Tunisian short films participated. 9 of them were selected for the competition.

In 2017, at the second edition, the festival became international. 120 short films from North Africa and Egypt participated. 30 of them were selected for the competition.

In 2018, at the third edition, the festival spread to the entire African continent. 248 short films from Africa. 54 of them were selected for the competition.

In 2019, FCKEF has the ambition to become an Arab-African festival. The call for the registration of films from Arab countries and Africa will remain open until July 31.

To create an alternative screen to show African short films while developing creativity and critical thinking.

Promote meetings, exchanges, and collaboration between film enthusiasts in Africa.

To produce original works within the framework of the workshops provided by the Festival.

To promote the access of disadvantaged areas to cinematographic culture by putting them in contact with the cinema in the Kef region.

To animate the city of Kef through different forms of shows and artistic events (music, dance, theater, street arts, exhibitions…).

Haunted by the satisfaction of the needs of the population in the region, the Festival has taken on the mission of bringing out talents from all over Africa and opening doors to them on the international scene, as well as organizing events and unique and unpublished shows in Tunisia, in culturally marginalized areas.

This year as well, FCKEF has the ambition to take the youth of the region on a journey to meet Africa and to invite it to one of its homes, in Kef.

The originality of FCKEF came with the devotion of an important part of its cultural activities to children from disadvantaged areas around Kef.

This year as well, FCKEF has the ambition to take the youth of the region on a journey to meet Africa!

Street performances, artistic expression workshops, meetings with film stars, and workshops for the production of original short films: These are all activities that will be on the program this year with the participation of the present artists. 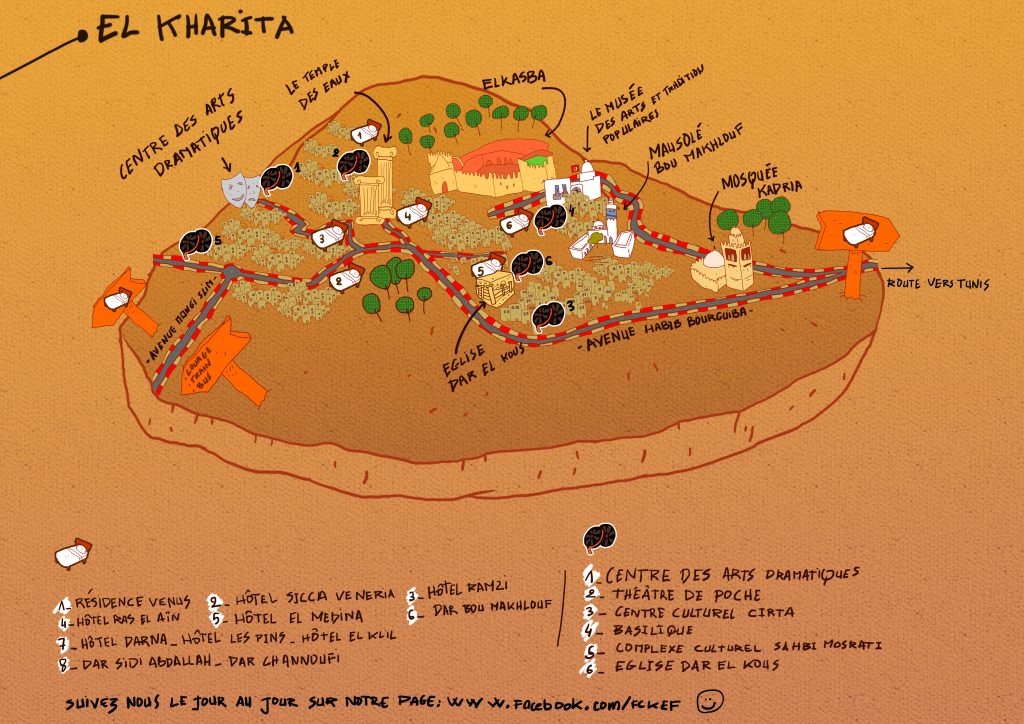